Founded in 1922 by Süleyman Fikri Erten and housed first in the Alaaddin Mosque in the old city and then in the Yivli Minaret, the museum was later moved to its current location. This museum which has started in its new building in 1972 is considered one of the most important museums in Turkey for its contents, works from Hellenistic, Roman, Byzantine and Turkish periods. The museum consists of 12 display halls, gardens and open galleries. In these halls the history of Antalya is given in a chronological and instructive fashion starting with the first humans and continuing without interruption to the modern era. There is also a new section called “Children’s Museum” which intends to interest children in museums. It also serves as a nursery for the children so that the parents can enjoy their visits to the museum. 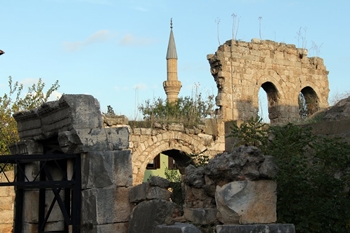 Kaleiçi (Old Town): Today the historical old city of Antalya known as Kaleiçi which is surrounded by two walls.
The inner wall encloses the harbor in a semicircle. You can see the Clock Tower in the center of the town. From here, when you look down toward the sea you can see the Fluted Minaret (Yivli Minare) which is the symbol of Antalya and one of the most beautiful buildings from Seljuk Period. This minaret was built in 1219-36 and is composed of a square stone base and a round fluted tower with red brick.As a result of restoration, Kaleiçi has turned into a major tourist centre with guest-houses, bars, shops and restaurants, and the Roman harbor has been turned into a modern, well-equipped marina. Here you should try some tasty local fish in a restaurant and you should feel the cool breeze from Mediterranean Sea in a hot day.
Hadrian's Gate: This gate was built for the honor of Emperor Hadrian’s visit in 130 A.D. This is the only city gate survived until the present day. It is also known as Three Gates and the whole gate, except for the columns, is made of pure white marble.
Old Houses of Antalya: The houses in Antalya are designed to provide protection against the merciless heat of summer. The stone overhangs and courtyards help provide air circulation. The houses in Antalya can be divided into three types based upon the design of the main hall, which also serves as a storage area. The three types are I halls, L halls and U halls. In the design of these houses, great attention was paid to meeting the necessities of daily life, while also providing harmony with nature and the environment.
Perge: By traveling 18 km east of Antalya and 2 km from the main road you can come to the old town Perge. It is accessed easily from Antalya or Alanya by buses. Because of its location on the Cilicia - Pisidia road, it was a vital part of the province of Pamphylia, and was founded around the same time as the other cities in the area (7th century BC). It was an important city for Christians of Perge who had worshipped the mother goddess Artemis. St. Paul and Barnabas visited the city and wealthy benefactors like Magna Plancia had a number of important memorials built here.
The first excavations began in 1946 by Istanbul University and they resulted in many important discoveries were those, the theatre consists of three main sections: the seating, orchestra and stage. It held 12,000 spectators, with 19 rows of seats on the lower section, 23 on the top section, and a 52-metre stage.
The stadium measures 34 square metres, with 13 rows of seats on top of the vaults. The eastern and western sides have 30 vaults each and the northern side has 10. For every three vaults there is an entrance to the stadium, and the other two were used as shops.

The Agora was the commercial and political centre of the city, with shops surrounding the central courtyard, some of which have mosaics on the floor.The agora measured 76 square metres, with a circular structure in the centre with a diameter of 13.40 metres.The colonnaded boulevard lies between the Hellenistic Gate and the nympheum on the slopes of the acropolis. On both sides of the street, 20 metres in width, are porticoes, some up to five meters high, behind which are shops. The street is divided into two by a 2-metre wide water canal running through the middle.Other structures include the necropolis, city walls, gymnasium, Roman Baths, memorial fountain and the Greek and Roman gates.
Aspendos: The ancient city, 48 km east of Antalya, is famous for its antique theatre, probably the best preserved in Asia Minor.
It is still in use today, and stages the annual Aspendos Opera and Ballet Festival every summer with a capacity of 15,000 people. It was the scene of a huge bloody battle between the Persians and the Greeks in 469 BC, and then ruled by the Spartans 120 years later. The city became part of the Seleucid kingdom after the death of Alexander the Great, and then became part of the Roman province of Asia in 133 BC.
The famous theatre was built by Zenon in the 2nd century A.D., using a Roman design, and it is still intact.
In addition to the theatre, there is an acropolis on a hilltop, of which the nymphaeum and basilica are still fairly intact.
Opening hours: Summer 08.00 - 19.00; Winter 08.00 - 17.30.
Termessos: If you drive north from Antalya and go left toward Korkuteli you will see a sign for Termessos at about 27 km from Antalya. You’ll have to climb 9 km after you get off the main road. This is one of the interesting ruins of Turkey which was founded by the Solymi people, from the interior of Anatolia. Among the important remains are the 4200-seat theatre and the Roman stele that Augustus had built at the beginning of the first century AD. The Odeon, the covered meeting hall, has seating for 600 people. The five inter-connecting underground cisterns were used for the storage of water and olive oil.
Other important remains include the Agora, with an open western side and other sides colonnaded; the heroic memorial of Hereon on top of a 6-metre high platform; the Corinthian-style temple, the Temple of Zeus, the Lesser and Greater Temples of Artemis, the gymnasium and the watch towers. In addition, there are more than 1200 rock tombs.
Phaselis: On the coast, 60 km south of Antalya, Phaselis was founded by the Rhodians in the 7th century BC, and was known as the most important seaport in Eastern Lycia. The city is accessible both by road and sea.
Olympos: This town is 70 km south of Antalya that lies between Kemer and Adrasan. It is the ancient harbor village of Çırali, the ruins of Olympos and the site of the Chimaera. The history of Olympos dates back to the 2nd century BC when it was an important Lycian city, although it was empty by the 6th century. The Olympians worshipped Hephaestos (Vulcan) the god of fire, probably connected to the eternal flame, or Chimaera, which still emerges from the mountain. Known also as Yanartaş (burning stone), the flame is caused by the burning of natural gas emerging from the mountain. Apart from the ruins, Olympos is well known for its simple tree house camps, where most tourists stay, and a natural environment thanks to forests and vineyards near to a beautiful beach. 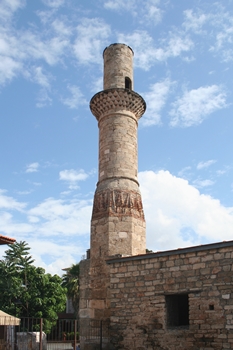 Limyra: Believed to have been in existence since the 5th century, Limyra is still in existence despite a massive earthquake in the mid 19th century although was emptied in the 7th and 9th centuries after the Arab invasions. The city which is located 11 km south composes of three sections; the acropolis, areas of settlement, and necropolis.
Arycanda: This town is surrounded by a town wall and the most of the settlement is on the steeper south side. Excavations of this city reveal that it probably existed from the 5th century BC, and controlled much of the Arycanda valley. Having survived a destructive earthquake in 240 AD, the city maintained its prominence until the 11th century, and it’s most important structures still survive today.
Myra (Demre): The town lies 25 km west of Finike and 48 km east of Kaş. It is one of the most important cities of the Lycian civilization which was a place of settlement from the 5th century B.C. The city was deserted in 9 A.D after the invasions of the Arabs. Rock tombs, theatres and the Church of St. Nicholas (said to be the original Santa Claus) are the most interesting sites in the town today.
Kekova: It is between Kaş and Demre. It is an ancient submerged city 500 m far from the Üçağız Village in Mediterranean. There you can see sunken cities and sarcophagi in Lycian type. Kekova is an island with the surface of 5.7 sq. km. and the height of 188 m. The circumference of the island is about 19 km. In the northern end of the island, there is an antique town most of which sunk under the sea. This is a paradise for under-water archeology.
Simena (Kale): Receiving its beauty from its history, sea and sun, Simena is accessible from Üçağız. The submerged city and the ancient remains at the opposite Kekova Island, makes it a worthwhile trip. There are traces of Roman and other civilizations in Simena, the history of which dates back to Lycian civilization. There is a 12px theatre carved into the rock, and Roman city walls.
Antiphellos (Kaş): This is a lovely town which took its name from the Greek word "Phellos" meaning stony place. A Greek island Meis is only 4 miles from here. This town is called “Kaş” meaning “eyebrow” because it resemble to an eyebrow on the island of Meis which looks like an eye itself. Here you should visit a beautiful 12px beach Kaputaş and Blue Cave 15 km west of Kaş. On the way to Patara a little town called Kalkan is worth to see with its harbor and pretty bay.
Patara: It is on Kalkan-Fethiye road, nearly 10 km after Kalkan and is located at the south.The colorful ceramics in the center of the city reveal that the history of the city reaches back to 5 B.C. Besides its being the birth place of St. Nicholas, it was one of the most important seaports during the times of Alexander the Great. Three gated city walls, one of which leads to Patara, were constructed by the governor Modestus. One of the most important remnants is the theater currently a big part of it is buried under the crystal clear sandy beaches of Patara.
Xanthos: On the way to Fethiye from Patara you’ll come to an antique town built on a slope and around it. This town is where the fist Federal Republic had started in the history named Xanthos. Founded on the Xanthos river basin, Xanthos is the biggest and the most ancient city of Lycia. Having being remained independent till the invasions of the Persians in 4292 B.C, Xanthos tried hard to defend against the invasions; however, upon realizing the remote victory the people of Xanthos first murdered their women then committed suicide as a whole. Afterwards 80 families immigrating to the region refounded the city but approximately 100 years later the city was totally destroyed by a great fire. Reestablished city thenceforth strengthened its connection with west and became an important center. Still the city can not be saved from misfortune. Upon resisting to the taxes of the Roman Brutus, the city was ruined and the people were dragged into war. And Xanthos became the city of catastrophe.
The city was founded around center of Lycia. Roman theater and the findings at the west side of the theater still attract the visitors. Harpy memorial on the rocks is one of the most important traces. Only the duplication of the work of art, the original of which is on exhibit in British Museum in England, can be seen in the region.